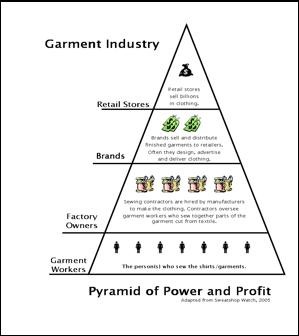 How It All Began

Garment workers did not always exist. It all began during the Industrial Revolution. The Industrial Revolution marked the era of exploitation. As machinery such as automobiles and sewing machines were built, life was made easier but it also created more ways for people to get exploited. For example, Federick Taylor analyzed every job in the mill and worked out a system to increase profits and production. This was known as Taylorism. Taylorism was beneficial for companies because people could do the work even though they were not experienced. One person would do the same movement over and over such as screwing a piece of metal to a car. The best part about this system is that anybody was replaceable because anyone could learn to do the same job really easily. As the Industrial Revolution grew, so did the companies. By 1905, there were 5 garment factories in New York. (Quote). Hence, the sweatshops were born. In the winter of 1909, women organized a strike at the Triangle Shirtwaist Company. Thousands joined the ILGWU everyday, including colored woman. In more than 300 shops, workers won their demands. There was a fire at the Triangle Shirtwaist Company on March 25, 1911. The fire happened in the 8th, 9th, and 10th floors but the NYFD did not have ladders that could reach that high. The laws said that the doors were supposed open outward but in the shirtwaist Company the doors opened inward. The laws also said the doors should not be locked during working hours but at the Triangle Shirtwaist Company the doors were usually locked. Trapped, the young women, and a few men were burned alive. 146 women died. There was a memorial parade down Broadway and 100,000 people marched.

The Numbers Speak for Themselves

So what can we do about all the exploitation outside and inside the U.S.? Times have without a doubt has changed a little but there is always room for improvement. The issues of pollution and exploitation continue. We can start by making people aware of what is going on. We can make them aware that they do have rights and they also have a voice. We can sit down and listen to the stories of those who have been exploited, those who have been mute by fear. We need to listen to his or her stories, listen to what they have to say, which is what nobody does.

Want to master Microsoft Excel and take your work-from-home job prospects to the next level? Jump-start your career with our Premium A-to-Z Microsoft Excel Training Bundle from the new Gadget Hacks Shop and get lifetime access to more than 40 hours of Basic to Advanced instruction on functions, formula, tools, and more.

Other worthwhile deals to check out:

Join the Next Reality AR Community

Get the latest in AR — delivered straight to your inbox.